We just committed some nice features to the ORM kernel, and SynDB* classes of our mORMot framework.

During BATCH insertion, the ORM is able to generate some optimized SQL statements, depending on the target database, to send several rows of data at once.
It induces a noticeable speed increase when saving several objects into an external database.

This feature is available for SQlite3 (3.7.11 and later), MySQL, PostgreSQL, MS SQL Server (2008 and up), Oracle, Firebird and NexusDB.
Since it is working at SQL level, it is available for all supported access libraries, e.g. ODBC, OleDB, Zeos/ZDBC, UniDAC, FireDAC.
It means that even properties not implementing array binding (like OleDB, Zeos or UniDAC) are able to have a huge boost at data insertion, ready to compete with the (until now) more optimized libraries.

On an recent notebook computer (Core i7 and SSD drive), depending on the back-end database interfaced, mORMot excels in speed:

The following tables try to sum up all available possibilities, and give some benchmark (average objects/second for writing or read).

This list of database providers is to be extended in the future. Any feedback is welcome!

Numbers are expressed in rows/second (or objects/second). This benchmark was compiled with Delphi 7, so newer compilers may give even better results, with in-lining and advanced optimizations.

Note that these tests are not about the relative speed of each database engine, but reflect the current status of the integration of several DB libraries within the mORMot database access.

Purpose here is not to say that one library or database is better or faster than another, but publish a snapshot of current mORMot persistence layer abilities.

In this timing, we do not benchmark only the "pure" SQL/DB layer access (SynDB units), but the whole Client-Server ORM of our framework: process below includes read and write RTTI access of a TSQLRecord, JSON marshaling, CRUD/REST routing, virtual cross-database layer, SQL on-the-fly translation. We just bypass the communication layer, since TSQLRestClient and TSQLRestServer are run in-process, in the same thread - as a TSQLRestServerDB instance. So you have here some raw performance testimony of our framework's ORM and RESTful core.

You can compile the "15 - External DB performance" supplied sample code, and run the very same benchmark on your own configuration.

Up to now, only UniDAC, BDE or ZEOS components were available as source, but we just added FireDAC / AnyDAC.

FireDAC is an unique set of Universal Data Access Components for developing cross platform database applications on Delphi. This was in fact a third-party component set, bought by Embarcadero to DA-SOFT Technologies (formerly known as AnyDAC), and included with several editions of Delphi XE3 and up. This is the new official platform for high-speed database development in Delphi, in favor to the now deprecated DBExpress.

Our integration within SynDB.pas units and the mORMot persistence layer has been tuned. For instance, you can have direct access to high-speed FireDAC Array DML feature, via the ORM batch process, via so-called array binding. 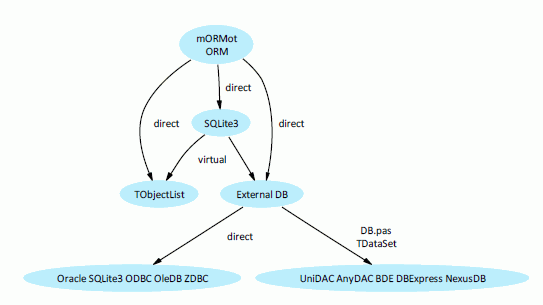 Up to now, our SynDB database classes were handling ODBC, OleDB providers and direct Oracle or SQLite3 connection.

We have added a DB.pas based layer, ready to be used with UniDAC, NexusDB, or the BDE.
Any other TDataset based component is ready to be interfaced, including UIB, AnyDAC or DBExpress.

The ZEOS library (in its latest 7.0.3 stable version, which works from Delphi 7 up to XE3) has also been interfaced, but without the TDataset/DB.pas layer: our SynDBZEOS.pas unit calls the ZDBC layer, which is not tied to DB.pas nor its RAD components, and is therefore faster. By the way, it will work also with the Starter edition of Delphi (which does not include the DB components) - just like the other "regular" SynDB classes.

This is a work in progress, any testing and feedback is welcome!
We had to circumvent some particularities of the libraries, but I guess we have something interesting.

Here is some benchmark, mainly about Oracle and SQlite3 database access.
Of course, our direct SynDBOracle / SynDBSQLite3 layers are the fastest around, and we can see that ZDBC layer is sometimes more efficient than the TDataset components.

Our downloadable documentation has been enhanced, and contains now a description about the main feature of 1.15 version, i.e. "database agnosticism". As stated below, you can use any other database access layer, if you wish.
A fast in-memory engine (TObjectList-based) is included, and can be used instead or together with the SQLite3 engine.
Or you may be able to access any remote database, and use one or more OleDB, ODBC, ZDBC, TDataSet, (or direct Oracle) connections to store your precious ORM objects.
The SQlite3 will be used as the main SQL engine, able to JOIN all those tables, thanks to its Virtual Table unique feature.

(article updated after removal of the TSQLRecordExternal class type for revision 1.17 - note also that BATCH process is now directly supported by the framework and converted to bound array parameters if available)