By default, both GDI+ anti-aliased drawing and PDF file generation using our libraries did lack of font-fallback implementation.

If some of the characters in a string are not supported in a requested font, they were drawn as square symbols on the GDI+ canvas or the PDF content.

The font-fallback mechanism implemented will use a third-party font (Arial Unicode MS by default, which is installed with Microsoft Office), for any glyph that are missing when rendering the content. Of course, for PDF generation, you are able to embed the font within the generated file (this is by the way mandatory for PDF/A-1 format).

Both of these new features are handled by the SQlite3Pages unit, i.e. for report anti-aliased drawing preview and PDF generation.

By the way, the TGDIPages class itself (the one used for report generation from code) now handles by default Unicode text, even with Delphi versions prior to 2009 (via the SynUnicode string type, which maps WideString before Delphi 2009, then UnicodeString starting with Delphi 2009). Does make sense with such a font-fallback mechanism.

Our PDF engine has been updated, it's now on version 1.8. 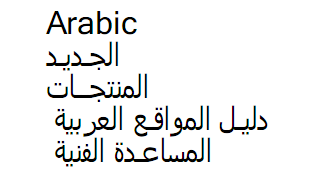 The Unicode part of the Synopse PDF engine has been updated in order to support right-to-left languages and ligatures (i.e. glyph shaping).

Therefore, our Open Source engine is one of the few PDF producer able to natively handle Arabic languages. Even most commercial engines don't implement this nice feature.

Synopse PDF engine is an Open Source PDF document creation library for Delphi, embedded in one unit. It's used in the 1.7 version of SQLite3 framework, for creating PDF files from reports.

Among its features, you can use a true TCanvas to create the PDF, and embed True Type fonts subsets. Of course, it's Unicode ready, and licensed under a MPL/GPL/LGPL tri-license.